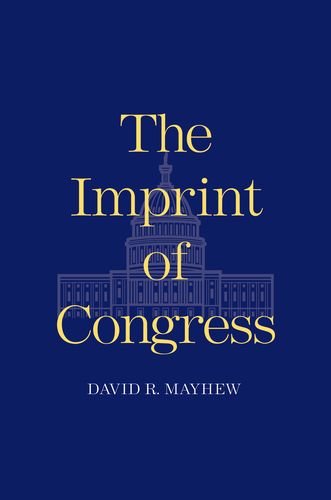 In this short volume, David R. Mayhew assesses the performance of American governing institutions throughout U.S. history. He takes stock of the national government's response to the major political challenges of each era, with a particular focus on Congress's contributions. In making these assessments, Mayhew sets the United States in comparison with peer countries, applying a “transnational Hegelian yardstick” (p. 11).

The focus here is on the largest possible challenges, those bearing major consequences for state-building, prosperity, and regime legitimacy, such as launching a new nation, continental expansion, building a welfare state, and the civil rights revolution. For each challenge, Mayhew draws upon a vast and meticulously documented secondary literature to offer a concise account of “who did what and when and with what consequence” (p. 14). The goal is to ascertain the relative influence of Congress and the president in responding to each challenge and how U.S. performance compares internationally.

Throughout these cases, Mayhew emphasizes that the relationship between Congress and the president is rarely one of zero-sum conflict, in which one institution wins and the other loses. Instead, the two institutions typically just have different priorities and emphases, without necessarily coming into direct confrontation.

Mayhew finds that presidents “ordinarily supply the initiative in the American system” (p. 98), but that conclusion is not the book's focus. Instead, the book's emphasis is on the different marks made by the two institutions. A few examples will illustrate some of the patterns.

Scholars often describe Congress as particularistic and parochial, but Mayhew points to another characteristic imprint of the institution: a populist politics of “blame and remedy.” In his analysis of the Progressive Era's efforts to tame the corporations and the rich, for example, Mayhew points to the dominance of Congress: “one's impression is of a cantankerous, mercurial, free-form legislature that was often fly-paper for popular impulses. . . . This is not distributive politics. It is populist or programmatic or ideological politics” (pp. 47–48).

Another distinctive congressional tendency has been to impede or thwart executive ambitions in international affairs: “In a signature role, Congress has often resisted or foot-dragged on White House aims for expansions, invasions, intrusions, annexations, and commitments abroad” (p. 48).

In responding to the Great Depression and constructing a welfare state, the executive branch took the lead role, but Mayhew flags some key congressional influences. While the executive branch's fiscal response to the Great Depression “contributed almost nothing to the recovery” (p. 58), the veterans’ bonuses of the 1930s—“entirely a congressional thrust” (p. 59)—were the most important countercyclical spending before World War II. In expanding the welfare state, the presidency tends to specialize in “big-bang” additions, such as Social Security, Medicare, and the Affordable Care Act (p. 62). Congress, by contrast, has preferred to take incremental steps, such as the gradual expansion of the State Children's Health Insurance Program.

After summarizing the patterns in tabular form (pp. 96–97), Mayhew concludes with two fascinating reflections on Congress's role. First, he contends that Congress has vitally contributed to the United States’ “rock solid” system legitimacy (p. 6). Congress has never been popular, but it has excelled at (1) forging compromises on difficult issues, most prominently and often tragically on race and region; (2) accommodating asymmetries of intensity and building large bipartisan majorities; and (3) stalling government action until a broader resolution is possible. Second, he suggests that a powerful Congress, with its tendency toward continual “tinkering with small regard for administratability” (p. 108), may be key to understanding the United States’ relatively limited investment in state bureaucracy.

Taken together, Mayhew concludes that the U.S. national government has not underperformed its peers; instead, its performance has been and remains generic or typical, rather than exceptional (p. 98).

This book crystallizes a powerful perspective on American governing institutions, one that should be widely assigned in courses. It can be read in a few hours, but it is richer in insight and ideas for future research than most books many times its length.