The Case for the Corporate Death Penalty: Restoring Law and Order on Wall Street, Mary Kreiner Ramirez and Steven A. Ramirez 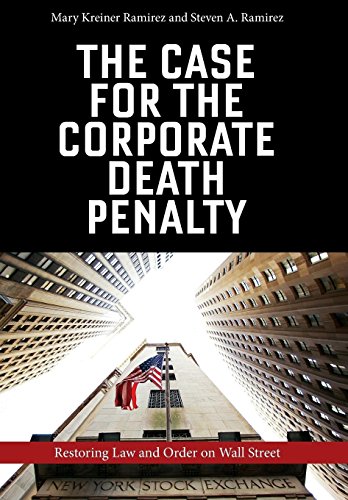 Who should be held responsible for the financial crisis? That question, which is at the heart of Mary Kreiner Ramirez and Steven A. Ramirez's clearly written and well-sourced book, The Case for the Corporate Death Penalty: Restoring Law and Order on Wall Street, has held a large share of the public and academic discourse over the past decade. The authors’ answer, as the title suggests, is corporations—specifically, Wall Street banks and the senior managers within them. But the blame is also laid at the feet of the Department of Justice, which, given to political and economic pressure, made “zero prosecutions of any megabank,” thus constituting a “historic breakdown in the rule of law” (p. xiv).

There is much to like about this book and its analysis of the central question, which is particularly timely as we approach the 10-year anniversary of the start of the financial crisis. Despite there being hundreds of books and articles written on the subject, only a few have directly tackled the issue of why the prosecutorial response was so anemic, and even fewer still with as much vigor or scope. Over six chapters, Ramirez and Ramirez marshal the facts against the leaders of Countrywide, Citigroup, JPMorgan Chase, Bank of America, Lehman Brothers, AIG, Goldman Sachs, Ernst & Young, and other companies for criminal w