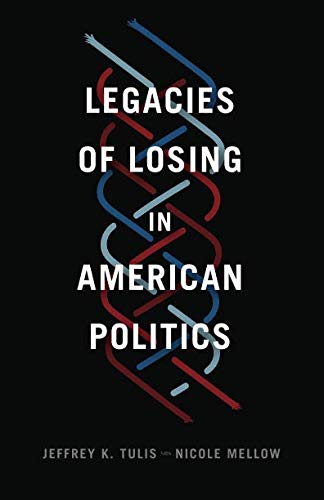 Winners are usually at the center of our narratives about politics. In this extraordinary work, however, Jeffrey K. Tulis and Nicole Mellow convincingly demonstrate that losing often produces long-term success. Through case studies of the Anti-Federalists, the presidency of Andrew Johnson, and the presidential campaign of Barry Goldwater, this book challenges dominant narratives in the study of American political development about the durability of regimes and provides a refreshing update to the stale debate over hegemonic liberalism in the United States.

Tulis and Mellow begin by presenting their three cases as “antimoments” in the history of American politics, in which “the losers in each of these major, order-determining contests decisively shaped the subsequent course of American politics” (p. 5). These stand in contrast to the victorious founding moments emphasized in most scholarly portrayals. In these antimoments, they argue, short-term losers build in the possibilities for long-term victory. Importantly, Tulis and Mellow focus on the agency of those involved in these contested events, adding to accounts that center on structural factors in political change.

This begins with the Anti-Federalists, who articulated and critiqued the Federalist project of a strong national polity and industrial economy. The Federalists foug