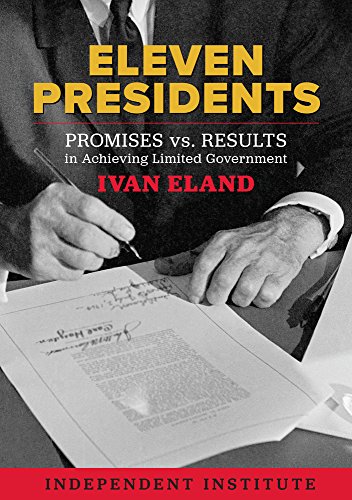 “‘Ranking the Presidents,’ has always been a Favorite Indoor Sport of history-minded Americans,” the great political scientist Clinton Rossiter once wrote. The problem with the game, as played, is that the participants typically base their rankings on cursory study or superficial impressions. According to Ivan Eland, a veteran of conservative and libertarian think tanks, “even many historians” form their judgments “without carefully examining the policies these politicians actually instituted” (p. 1). He believes that presidents’ standing should rest on “on their actual policies, rather their rhetoric, intelligence, leadership styles, charisma, activism, service during a crisis, or other largely irrelevant attributes” (p. 1).

With this intriguingly provocative thesis he begins Eleven Presidents: Promises vs. Results in Achieving Limited Government. In a previous book, Eland surveyed and rated all chief executives past; this volume focuses on the years since World War I. What's more, Eland is a strident proponent of what is sometimes called a “libertarian” worldview. He believes devoutly that the federal government should stick to a “rigidly enumerated” set of tasks and that presidents should adhere to the modest role characteristic of nineteenth-century execut

To the Flag: The Unlikely History of the Pledge of Allegiance, Richard J. Ellis Reviewed by David Greenberg