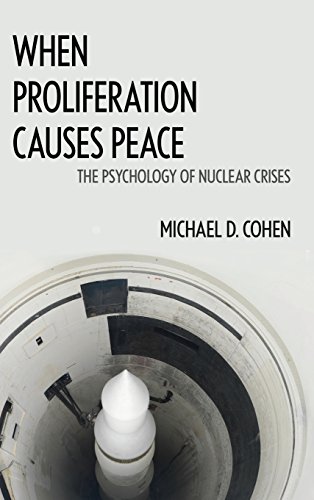 Two questions have received less treatment: how do nuclear weapons affect the foreign policies of new nuclear weapons states, and what does this tell us about the dangers of nuclear proliferation? Michael D. Cohen has written an excellent book that begins to answer these questions. Using cognitive psychology, Cohen argues, “Leaders of new nuclear powers tend to authorize assertive foreign policies and accept the risk of nuclear escalation until those leaders experience fear of imminent nuclear war themselves” (p. 12). Thus, once the initial period passes and new nuclear leaders experience firsthand the terrifying prospect of nuclear war, nuclear proliferation becomes less dangerous. Cohen presents a persuasive argument that this nuclear path is not static and evolves as leaders learn from their experiences as a nuclear weapons state.

After laying out the theoretical framework in Chapter 2, the next three chapters examine case studies that provide empirical evidence for his argument. Chapter 3 chronicles ho