Reviewed by Edward B. Rugemer 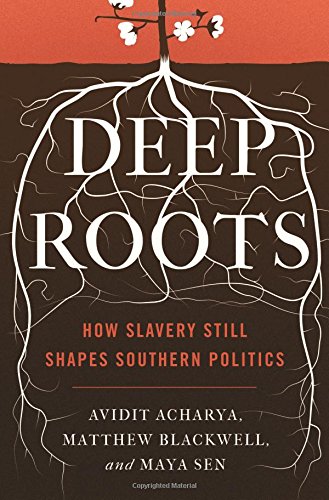 On 2 February 1893, the mayor of Paris, Texas, gave the town's white children the day off from school so that they could attend a lynching. They joined their families in a procession that accompanied a carnival float pulled by four white horses to a gallows erected at the edge of town. There the crowd watched and cheered as local whites tortured and hung Henry Smith, a black man accused of murdering a white girl.

The authors of this careful study tell this story to illustrate the “intergenerational socialization” (p. 161) of white southerners, whose views, they argue, are still shaped by the inheritance of racial slavery. The history of American slavery is well known, but it is usually thought of in the past tense. In 1860, four million enslaved African Americans labored throughout the dynamic southern economy. An interstate slave trade that broke up thousands of black families concentrated enslaved people in particular counties. Jefferson County, Mississippi, for example, was 81 percent enslaved in 1860, while Buncombe County, North Carolina, was only 15 percent enslaved. These numbers reflected variations in agricultural suitability; the most profitable agricultural regions drew the most slaves. But remarkably, the authors have found that the prevalence of slavery in a particular county in 1860 has a measurable impact upon the racial attitudes of the white community in that county today.

According to survey data, whites from counties that had high percentages of enslaved people in 1860 are more conservative on racial issues than the whites of counties that had lower percentages of slaves. Whites from historically high-slave counties tend to resent African Americans more, are less likely to approve of affirmative action, and are more likely to believe in white racial superiority than whites from historically low-slave counties. It is not simply that southern whites are more conservative. On issues such as abortion rights or gay marriage, survey data reveals no distinction stemming from the 1860 census.

How can this be? Through a process the authors name “behavioral path dependence” (p. 11), political attitudes can be passed down from generation to generation for a significant period of time. This process begins with a “critical juncture” (p. 153) in time—a powerful historical moment that establishes a persistent pattern. In the American South, this “critical juncture” was the abolition of slavery during the Civil War. In the high-slave counties, the legacies of slavery were most powerful. Convict leasing was more prevalent, lynchings more common, and patterns of peonage were more deeply rooted. Powerful white men from these counties dominated state politics when new state constitutions disenfranchised black voters in the early twentieth century. The effort to reestablish slavery “by another name” (Douglas Blackmon, Slavery by Another Name: The Re-enslavement of Black Americans from the Civil War to World War II [New York: Anchor Books, 2008]) developed in the counties most dependent upon slavery before the war. This geographic pattern of oppression shapes racial attitudes to this day.

Yet Paris, Texas, sits in Lamar County, which in 1860 was only 28 percent enslaved. The children who attended the lynching in 1893 participated in a gruesome ritual that extended far beyond the high-slave counties of 1860. The authors of this important book have demonstrated a narrow claim, but the truth that emerges from their work is far more profound. As the great southern writer William Faulkner observed, in his 1951 novel Requiem for a Nun, “The past is never dead. It's not even past.”