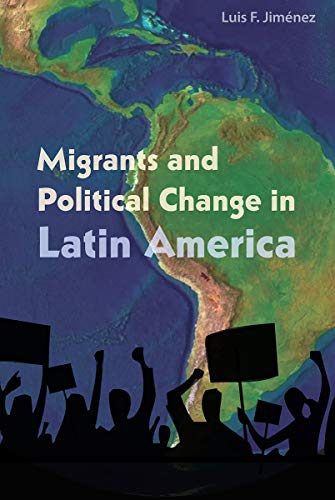 How do international migrants affect their origin countries’ politics? Drawing on evidence from the cases of Colombia, Ecuador, and Mexico, Migrants and Political Change in Latin America argues that migrants gain new attitudes and economic resources as a result of experiences in their receiving countries that they then transmit to their origin countries through economic and social remittances and through return migration. Jiménez claims that by transmitting resources and ideas through these three channels, migrants create changes in the politics of their origin countries that they never intended or envisioned. These effects are mediated by local conditions in origin countries such as levels of education and wealth. Moreover, the social networks in which both types of remittances and return migrants are embedded augment their political effects.

Migrants and Political Change in Latin America adds to a growing number of books concerning how migrants influence their origin countries’ politics. The book resembles Devesh Kapur’s Diaspora, Development, and Democracy: The Domestic Impact of International Migration from India in its effort to identify the channels through which migration can influence origin countries. Its emphasis on social remittances complements Michael S. Danielson’s Emigrants Get Political: Mexican Migrants Engage Their Home Towns. And the sections on remittances and return migration are akin to Roy Germano’s Outsourcing Welfare and Christl Kessler and Stefan Rother’s Democratization through Migration? Political Remittances and Participation of Philippine Return Migrants, respectively. These books provide detailed accounts of the mechanisms through which remittances and return migration shape specific political outcomes and could help Jiménez develop more nuanced causal stories.

The greatest strength of Jiménez’s book is its effort to test a common set of hypotheses across three country cases. The inclusion of Ecuador and Colombia highlights, to some extent, how migrants’ effects on origin country politics are conditioned by whether their destination country is an established democracy in ways that the case of Mexico does not. This finding corroborates others’ research indicating that migrant destinations shape the political effects of social remittances. Perhaps more importantly, by looking at Colombia and Ecuador, the author considers migration’s effects on some previously unexplored dependent variables, including aggregate support for the 2016 peace agreement in Colombia and responses to the 2013 referendum on independent media in Ecuador. These types of political outcomes are novel and merit further exploration.

The book’s scope is also its limitation, however. Jiménez examines migration’s effects on numerous aggregate local and national level political outcomes, including electoral participation, party competitiveness, social investment levels, and support for various referenda. He considers these distinct political outcomes to be indicators of one broad dependent variable that he refers to as political change or, more specifically, quality of democracy, which is defined as citizens’ access to and exercise of power, following Sebastián Mazzuca. In treating many diverse political outcomes as indicators of one broad concept, Jiménez overlooks that their prevailing explanations are rooted in widely different theoretical literatures. It would have been nice to see him draw more extensively on the research concerning what factors account for aggregate social investment, support for peace agreements, partisan competitiveness, and so on, to provide more nuanced accounts of why we might expect economic or social remittances or migrant returns to make a difference.

Similarly, I would have liked to learn more about how fundamental differences in the migration and political histories of each country condition the effects of the three independent variables. Homing in on fewer dependent variables, or on a single migration-driven source of change, would have enabled Jiménez to produce a deeper cross-national analysis.