We Decide! Theories and Cases in Participatory Democracy, Michael Menser 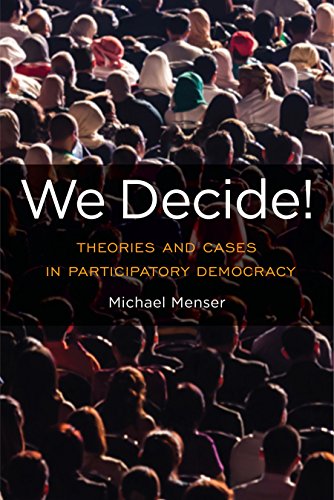 We live in a time of disillusionment with traditional neoliberal models of the economy and democracy and the rise of right-wing global populism. This moment, then, offers opportunities for further exploration and research into alternative models of participatory democracy (PD).

Michael Menser, an assistant professor at Brooklyn College and the City University of New York, is uniquely positioned to consider these opportunities. He has supplemented his academic work in environmental sciences and psychology as an active champion of bringing participatory budgeting and participatory democracy to the United States, particularly New York City.

Unlike political theorists, who generally rest in the abstract world of ideas, Menser connects political theory to concrete, actionable global examples across politics, economy, and society—taking into account the very real disparities of power within both public and private spaces. The discussion examines the workplace and the opportunity of worker co-ops, large-scale economic shifts from production to ecologically oriented social production, and linking elements of PD to broader structural reform, such as reshaping public-private partnerships. Ultimately, the book argues for repositioning the role of the twenty-first-century political theorist: “to break its obsession with critique and expand its empiri