Who Donates in Campaigns? The Importance of Message, Messenger, Medium, and Structure, David B. Magleby, Jay Goodliffe and Joseph A. Olsen 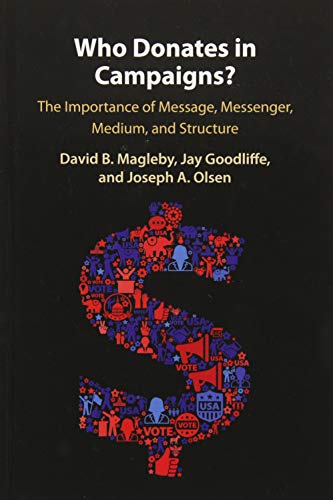 In the first quarter of 2019, nearly a year before the first contests, before former vice president Joe Biden had even entered the race, Democratic and Republican presidential candidates reported raising more than $112 million from individual donors. Almost 57 percent of that money came from those who donated less than $200 to the campaigns. Who are these people?

Until David Magleby, Jay Goodliffe, and Joseph Olsen’s new book, we had little idea. Studies ranged from the speculative, to the indirect, to the incomplete, with even the best work focusing mostly on larger donors (who must be named in Federal Election Commission reports) or on surveys such as the American National Election Studies (in which respondents self-report, and often overreport, their own participatory behavior). With the cooperation of the Barack Obama, John McCain, and Mitt Romney campaigns, Magleby, Goodliffe, and Olsen have built a heretofore unimaginable data set comprising a sample of all contributors to the 2008 and 2012 Democratic and Republican presidential nominees. Each campaign provided the researchers with a random sample of its small donors, who were then contacted and surveyed, along with a stratified sample of larger donors. “The unprecedented nature of this study cannot be stressed enough,” the authors state (p. 3)—and they are right.