Reining in the State: Civil Society and Congress in the Vietnam and Watergate Eras, Katherine A Scott 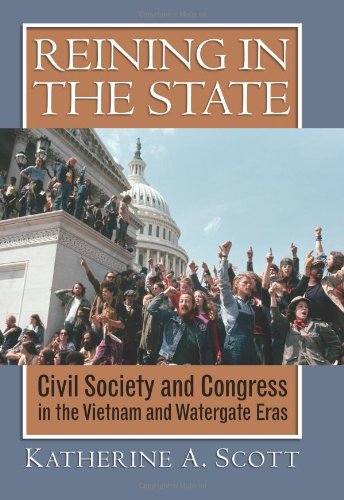 In the very first pages of this detailed work, readers are struck by how timely it is. With recent news stories about leaks about NSA activity from Edward Snowden and the ongoing story of WikiLeaks, it becomes evident that this is a must‐read for anyone who wishes to be a part of the contemporary debate. Katherine Scott goes back to the 1950s to begin telling the tale of a government and its people struggling over the roles of national security, privacy, and the public’s right to know in a democratic system. Scott makes clear that this debate is central to the question of democratic governance in a dangerous world that requires a government to take steps to protect its people.

Having been around for much of the time frame covered by Reining in the State, but only a teenager by the time of Watergate, Scott recalls for me the events that were going on around me but only registered at the level of the subconscious. We all hear of the McCarthy Era and the overreach by one elected official into the lives of average citizens, but perhaps do not recall that the U.S. Army was actively involved in surveillance and counterintelligence work during the Civil Rights movement and the Vietnam War protests. Scott details a number of courageous individuals in elective office or retired from the Army who came forwar

Watchdogs on the Hill: The Decline of Congressional Oversight of U.S. Foreign Relations, Linda L. Fowler Reviewed by JIM TWOMBLY