Watchdogs on the Hill: The Decline of Congressional Oversight of U.S. Foreign Relations, Linda L. Fowler 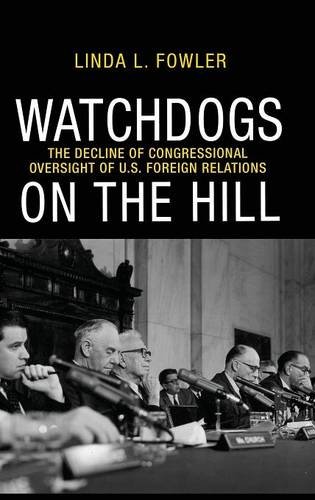 More than 200 years ago, James Madison proposed that ambition would check ambition in a system of checks and balances, in which no one branch of government would accumulate so much power as to dominate the other two. Linda L. Fowler, in Watchdogs on the Hill, appears to lament the lack of such ambition on the part of the legislative branch of our government. She presents evidence that the typical oversight activity (hearings) of two key Senate committees—Foreign Relations and Armed Services—has declined over time since the start of the Cold War. To say that this observation is disturbing is quite an understatement and somewhat alarming. It would, no doubt, be of some concern if these were committees on labor, education, or agriculture, but the committees Fowler is studying are two of the major national security oversight committees in the Senate. Certainly, in the capacity of either Commander in Chief of the armed forces or as the nation’s chief diplomat, the president has a great deal of latitude in conducting the affairs of the state. Still, do we really want the president to use all of that latitude beyond both the public eye and the eyes of the legislature?

Reining in the State: Civil Society and Congress in the Vietnam and Watergate Eras, Katherine A Scott Reviewed by JIM TWOMBLY