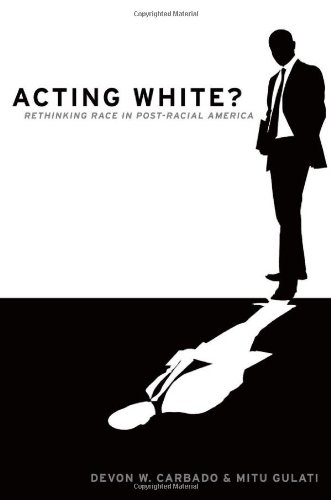 The number of publications arguing that the United States is not post‐racial despite twice electing Barack Obama to the presidency is many orders of magnitude greater than the number of publications claiming that the United States is post‐racial. In fact, it is difficult to find anyone asserting post‐raciality beyond one New York Times Magazine article and a few Fox News commen­tators around the 2008 election. Nevertheless, attacks on the purportedly common assumption continue.

Thus, it is a bit surprising to find, in yet another book challenging the idea of a post‐racial America, a somewhat novel argument. Acting White asserts that everyone seeking a job, college admission, elective office, or safe interactions with police must establish a Working Identity. It is “a set of racial criteria people can employ to ascertain not simply whether a person is black in terms of how she looks but whether that person is black in terms of how she is perceived” (p. 1). A Working Identity includes everything from hair and clothing style to social networks, marital choices, political opinions, accent, “and so on and so forth” (p. 1). That framework already suggests a tension in the book to which I return: it focuses primarily on the difficulties that a Working Identity creates for blacks, but

Chasing the American Dream: Understanding What Shapes Our Fortunes, Mark Robert Rank, Thomas A. Hirschl and Kirk A. Foster Reviewed by Jennifer Hochschild