Chasing the American Dream: Understanding What Shapes Our Fortunes, Mark Robert Rank, Thomas A. Hirschl and Kirk A. Foster 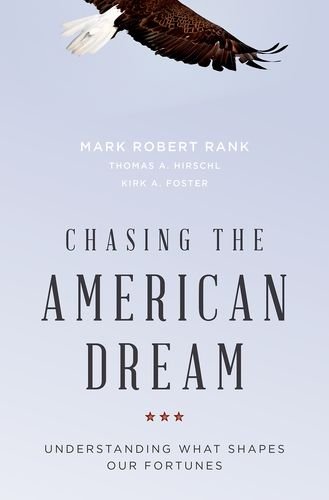 Mark Rank and his colleagues join a long list of authors (truth in advertising: including myself) who have struggled for decades to elucidate the bittersweet meaning and motivational force of the American Dream. The metaphor’s first definer, James Truslow Adams, lauded it in 1931 as the “dream of being able to grow to fullest development as man and woman . . . unrepressed by social orders which had developed for the benefit of classes rather than for the simple human being of any and every class.” In the same paragraph, he captures the American Dream’s maddeningly Janus-faced quality: although “realized more fully . . . here than anywhere else,” it “has been realized . . . very imperfectly even among ourselves.” Rank, Hirschl, and Foster add two elements to the robust literature on this complex concept: extensive quotations from subjects of qualitative interviews and focus groups and an analysis of individuals’ economic well-being over their lifetimes through life table models derived from the Panel Study of Income Dynamics (PSID). They also make good use of census data, other scholarship, and some survey data.

Chasing the American Dream is well written, cleanly organized, and generally compelling. It starts with chapters organized around three interviewees who exemplify the themes of passion for th