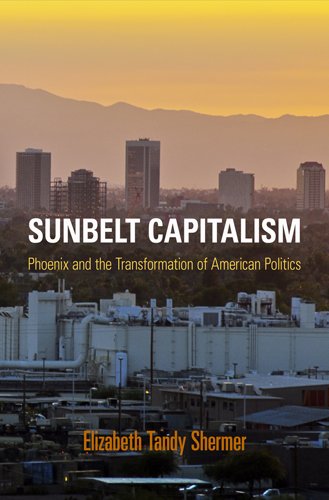 American historians, of late, have been rediscovering the history of capitalism and the key role American capitalists have played in American politics, a scholarship showcased in the edited collection, What’s Good for Business: Business and American Politics since World War II (2012). Elizabeth Sherm­er’s book on the political economy of Phoenix in the middle decades of the twentieth century is a valuable contribution to this literature. Focused on “grasstops” activists, most of them members of the Phoenix Chamber of Com­merce, Shermer argues that a pro‐growth coalition—business boosters— took over Phoenix and Arizona politics in the immediate post‐World War II era and crafted a model of economic development that largely benefited local and regional businessmen, at the expense of working‐class residents. These business activists, like their peers in most other fast‐growing Sunbelt metropolises, continued to exert hegemonic control over the political economy of their communities well into the twenty‐first century. At least in terms of population growth, this pro‐business political bloc succeeded wildly, as Phoenix went from a small, economically peripheral town of 11,000 people in 1910 to America’s sixth largest city, with a population of nearly 1.5 million in the early twenty‐first century. It