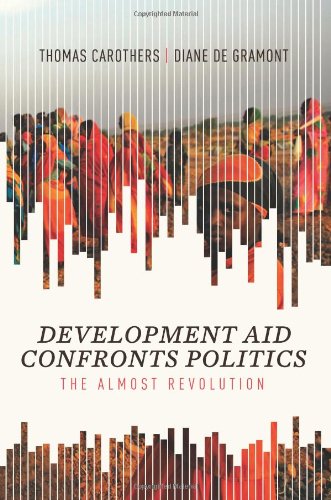 This book on the increasing role that politics has come to play in the distribution of foreign aid (the study focuses primarily on U.S. bilateral aid) is both timely and comprehensive, covering the history of the evolving role of politics in aidgiving (which is not new, but is more influential today than probably at any time in the past), the meaning of politics in aid‐giving, and the increasing prominence of same, especially where aid donors link aid to political changes in recipient countries (such as democratization, greater political participation, improved governance [and less corruption], and the role of politics in aid‐giving to fragile and failing states (also a growing focus in the general field of development).

The authors clarify the concepts involving politics in aid‐giving. For exam­ple, they make a distinction between aid associated with goals such as political reforms in recipient countries (estimated to absorb 5–15 percent of total aid annually) and aid‐giving based on methods that take into account the politics and power relations among major political groupings and forces in aid‐receiving countries—the first an end of aid‐giving, the second a process by which aid donors seek to uncover and understand political groupings and institutions in recipient countries (so that aid donors can shape their aid for maximum impact based on an understanding of the political dynamics in the recipient countries and avoid doing unintentional harm by allocating aid without knowing thepolitical contextof thatcountry, thatis, upsetting political settlements among political elites or ethnic groups).

The authors lament the long years and decades during which aid donors paid little attention to the politics and power relationships in the countries receiving their aid, attributing that neglect to the strong and lingering influence of the technocratic approaches so long followed by the economists who have played such a major role in shaping developing thinking and the approach of many practitioners to development planning and implementation—and to the sensitivities and resistance that governments concerned about protecting their sovereignty have mounted to aid‐giving governments tying politics (of any kind) to the delivery of foreign aid. The authors also make the interesting point that it was the end of the Cold War that opened the door for aid‐giving agencies to inject a greater number of political concerns into aid giving; they were liberated from the fear that aid‐receiving governments might reject their aid (with politics) and turn elsewhere (for example, to the Soviets and their allies) in their search for aid.

One of the challenges of using aid as a lever to persuade recipients to change policies or structures is that there is still no broad‐based consensus among development scholars and practitioners (and officials) on what institutions, practices, and policies are most effective in carrying development forward. The authors rightly points out that many of the assumptions accompanying the political goals that aid‐giving governments support (for example, that democ­racy is the best form of government to spur rapid development) are at this point just that—assumptions, and that the ideas of those pushing the value of democracy for development are contested and still lack definitive empirical data to decisively demonstrate the validity of these assumptions.

The authors underline the growing consensus among development experts and aid‐giving institutions that politically informed methods are essential for aid in support of effective change. They rightly observe that many of the major aid‐giving agencies and think tanks—DFID, USAID, the Overseas Develop­ment Council in London, CIDA in Canada, SIDA in Sweden and others—that have formulated policy statements, based on careful research and case studies. are active in the politics and development space and have, as a result, opened up this field of action and research and have contributed to a better understanding of the methods of politics and aid‐giving for development. It is a rapidly growing and deepening field that deserves much more attention than it has yet received, with a lot of opportunities for scholarship as well as policy analysis and for more theoretical work, too, including a much‐needed theory of political change relevant to the politics of aid‐giving.