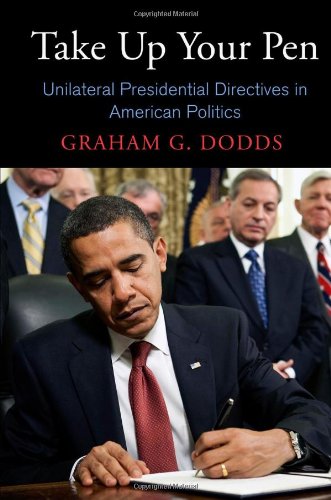 The unilateral actions of President George W. Bush in seeking to combat the war on terror, followed by President Barack Obama’s efforts in attempting to overcome Congressional inaction by pursuing major policy initiatives through executive order, have again brought into focus the question of whether presi­dential power has expanded to the point where, in Arthur Schlesinger’s famous coinage, the United States now has an Imperial Presidency. To hear some tell the story, Presidents Bush and Obama have taken presidential power to new heights, thereby endangering constitutional limits on separation of powers. To hear others, the actions of these presidents have been fully consonant with those of their predecessors and present no new threat to the constitutional system of checks and balances.

Graham G. Dodds’s book has much to offer for this discussion. The bulk of the volume (chapters 4–7) meticulously traces the development and evolution in the uses of unilateral presidential power from the presidency of George Washington to that of Barack Obama. Dodds presents what might initially seem to be fodder for both sides of the argument. On the one side, his historical presentation vividly demonstrates how much presidential power has expanded since the founding, both in the kinds and the efficacies of the instruments of power available to the president and, equally dramatically, in the breadth of substantive matters that have become the subjects of presidential initiatives. On the other side, his careful detailing of the specific instances in which presidents have used unilateral presidential directives suggests that the controversial unilateral initiatives pursued by both Bush and Obama are not outside the bounds set by their predecessors.

This latter insight may in the end, however, be more worrisome than comforting to those who are concerned about the expansion of presidential power. As Dodds repeatedly shows, the actions of one president systematically provide both the legal and political justifications for similar initiatives under­taken by later presidencies. The strength in Dodds’s chronological ordering is that it graphically depicts how and why the dynamic of presidential power works only as a one‐way ratchet.

Scalia: A Court of One, Bruce Allen Murphy Reviewed by WILLIAM P. MARSHALL