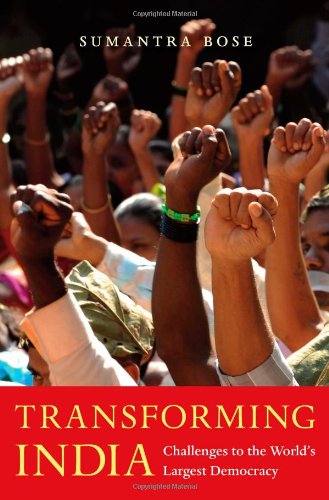 Sumantra Bose’s study of Indian politics begins with the proposition in his introduction that “India has moved inexorably from single‐party dominance and a relatively centralized union and toward a multiparty democracy that reflects the nation’s diversity of communities. …” (p. 6) Bose argues that the continued strength and diversity of Indian politics is due to a system that has accommodated popular struggles from below by ordinary people. He attributes this to the “regionalization” of Indian politics as local parties have emerged over the past two decades to represent particular local interests far better than the once‐dominant and ‐centralized Congress Party. The book is organized to follow the progression of Bose’s argument on regionalization. The first chapter (From Independence to 1989) covers the period of Congress Party hegemony, which fragments due to its inability to represent the increasingly assertive demands of important constituent elements. The second (The Transformation since 1990) focuses on the emergence of competitive regional parties, a period which also coincides with the adoption of market reforms in the early 1990s. The remaining three chapters are a set of case studies to show the struggle of three local political forces to represent the demands of politically disadvantaged groups.

While Bose cautions that the future success of India’s powerful regional leaders in overcoming the problems of poverty, corruption, and inequity will depend on their becoming less susceptible to primordial instincts and on their ability to adopt national perspectives, he is basically optimistic that the emerg­ing class of state leaders will meet these formidable challenges. His prediction, however, that the era of national leaders “is definitively in the past, rendered obsolete by the transformation of India’s democracy” (p. 293) may be prema­ture. There are only two parties (the Congress and the Bharatiya Janata Party) among some three dozen parties represented in Parliament that have a national reach, and each is now dominated by a prominent politician. While the rise of regional parties in the 1990s forced the two national parties to cobble together coalitions with regional parties at the center, the past four coalition govern­ments have all been led by a national party, and the prospects are good that this will happen again after the April–May 2014 parliamentary elections. Over the past four parliamentary elections, the popular vote share of the two national parties has been relatively stable. Moreover, these two national parties now govern a majority of the Indian states. The relationship between national and regional parties might best be characterized as symbiotic. The national leader­ship is transforming itself to accommodate the demands of regional political forces.

Perhaps the major shortcoming of what is an excellent analysis of the growing strength of regional politics and regional politicians is Bose’s scant treatment of the political and bureaucratic impact of market reforms adopted in the 1990s. While the economic growth rate has surged, numerous studies show rising inequalities between the poor and the rich (the gini coefficient), between regions, and between urban and rural areas. How has this affected democracy and the commitment of the losers to the political system? There is a considerable literature that has emerged analyzing the impact of market reforms on the political process, one of the best being that of Aseema Sinha, who, in one of her articles on the subject, convincingly argues that there are “plenty of winners and the losers have not lost hope and turned to ‘antisystem’ politics.” (Aseema Sinha, “Economic Growth and Political Accommodation” in Sumit Ganguly et al., The State of India’s Democracy, Baltimore, MD: Johns Hopkins Press, 2007, p. 206).