The Civic Constitution: Civic Visions and Struggles in the Path toward Constitutional Democracy, Elizabeth Beaumont 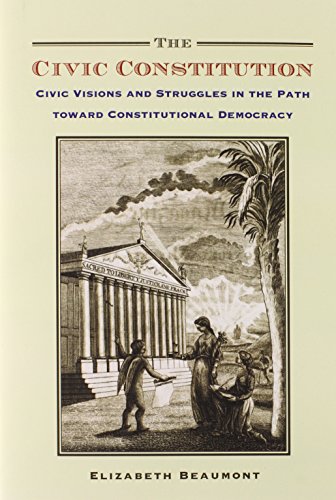 Because the U.S. Constitution’s text has proved so difficult to amend, its meaning has often changed through judicial interpretation. Generations of political scientists have understood constitutional development as shifts in U.S. Supreme Court doctrine. In the past two to three decades, however, scholars have begun to emphasize the role of presidents, parties, and political reformers in making constitutional meaning, and all of this constitutional meaning making outside the courts has been dubbed “popular constitutional­ism.” Elizabeth Beaumont’s engaging new book, The Civic Constitution: Civic Visions and Struggles in the Path toward Constitutional Democracy, is an important contribution to this literature.

Beaumont focuses primarily on the creation of new constitutional texts, rather than interpretations, and calls our attention to the way that the mem­bers of the formal institutions that drafted these texts were responding to pressures from those outside. Beaumont’s conception of “civic constitutional­ism” involves ordinary people who advance a welter of constitutional argu­ments challenging and often reshaping the existing conceptions of fundamental law (p. 4). Beaumont convincingly demonstrates that popular constitutional arguments were not a mere backdrop to the real task of writing and a