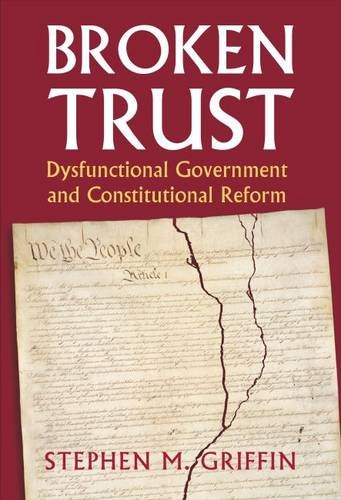 Stephen M. Griffin has helped redefine the study of constitutional development by calling scholars’ attention to transformations in the fundamental structures and processes of governance. These changes often escape notice because they tend to occur outside the courts and without a formal announcement, yet Griffin demonstrates that to ignore them is to miss crucial features of our constitutional order and its development. His most recent book, Broken Trust: Dysfunctional Government and Constitutional Reform, continues this important project.

In Broken Trust, Griffin sets out to demonstrate that a late twentieth-century decline in American citizens’ trust in government (mis)shaped America’s governing institutions and that we should understand this decline as a constitutional problem. He argues that representative government cannot operate effectively in an atmosphere of citizen distrust and that Americans’ lack of trust in the federal government is ultimately responsible for the dysfunctional condition of American politics today.

In the first chapter after the introduction, Griffin joins scholars such as Sandy Levinson (author of the book’s interesting foreword) in urging Americans to overcome their instinctive veneration of the federal Constitution in order to grapple with its problems. The chapter explo

The Civic Constitution: Civic Visions and Struggles in the Path toward Constitutional Democracy, Elizabeth Beaumont Reviewed by EMILY ZACKIN