Artists of the Possible: Governing Networks and American Policy Change since 1945, Matt Grossmann 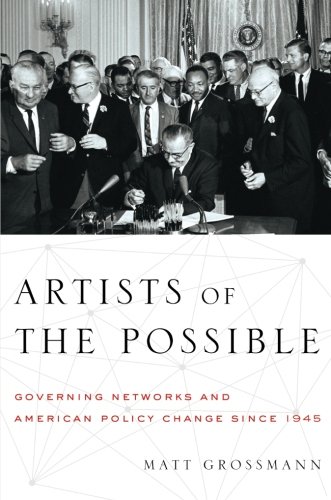 Matt Grossmann offers a compelling and holistic analysis of American federal domestic policymaking since 1945. He explains the slow speed and rarity of policy enactments from the perspective of governing networks. In doing so, he challenges the dominant theories that model policy change as a function of elections, public opinion, and ideology. Although he acknowledges that these traditional factors play a role at times, he argues that the ultimate drivers of change are the networks among politicians, administrators, and interest groups. Such bonds developed over time are necessary to overcome the nontrivial institutional hurdles to policy enactment.

The story that Grossmann puts forth in Artists of the Possible is one in which policy enactments are tall orders. We should expect little in the way of policy change, outside of the exceptional times when ties develop among these actors. The networks formed during the Great Society are an exception to the rule of the status quo. Then, major players formed bonds that were maintained well into the 1970s and allowed for unparalleled success at liberal policy enactment. As a testament to his rigorous approach, Grossmann also shows that not all political actors are equal. Presidents are particularly good at enacting policy change, but even among them, there is substantial variance. Success is contingent on their