Cheap and Clean: How Americans Think about Energy in the Age of Global Warming, David M. Konisky and Stephen Ansolabehere 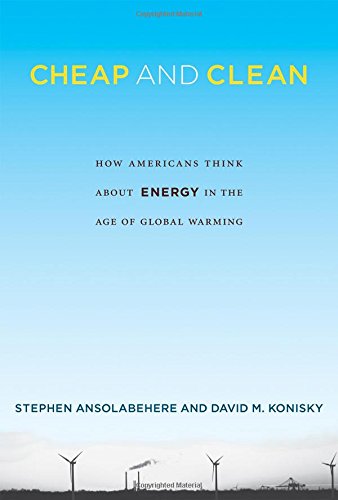 How do Americans think about energy, and what kind of energy future do they want? Given the importance of energy to our economy and environment, one might expect extensive polling on these subjects. But, as Stephen Ansolabehere and David M. Konisky point out in Cheap and Clean: How Americans Think about Energy in the Age of Global Warming, public opinion data on energy related questions are episodic and incomplete. Filling this gap provides a central rationale for their book, which presents and analyzes results from a multiyear study of Americans’ attitudes toward energy technologies and policy.

Their research reveals that Americans think about energy in pragmatic terms. People’s attitudes about energy are relatively stable and shaped by two key attributes of the fuels themselves: price and environmental harm. The authors dub this the “Consumer Model” of energy policy preferences, claiming that “energy is not a highly politicized issue” (p. 201). Energy appears to be one of the few policy areas that has escaped partisan polarization, at least when it comes to the public.

While the title of the book suggests that Americans want energy that is both cheap and clean, the data show that the public puts much greater weight on the environmental impact of different fuels. This helps explain the public’s

“I’m Changing the Climate, Ask Me How!”: The Politics of the Anti-SUV Campaign, SARAH PRALLE