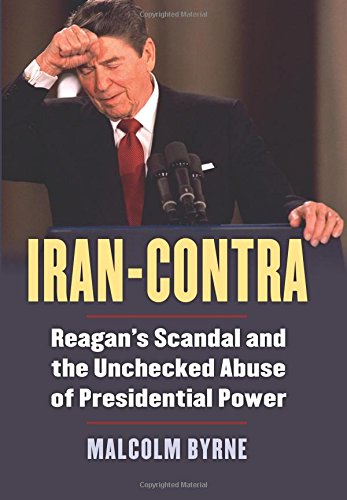 Three decades after the Ronald Reagan administration’s greatest foreign policy disaster, observers of Iran-Contra continue to be surprised at how little attention the scandal has received. This inattention can be explained, if not justified. After revelations that legally dubious intelligence operations had collided to provoke a constitutional crisis, censure of those involved was surprisingly light. Few on Capitol Hill were interested in the prospect of another presidential impeachment, and geopolitical developments such as the fall of the Berlin Wall, the crackdown at Tiananmen Square, and the first Gulf War commanded the attention of policymakers and the public alike. Still, with the benefits of hindsight and document declassification, it is surprising that relatively little has been written to resurrect debate about Iran-Contra.

Malcolm Byrne is the right person to provoke that discussion. As deputy director of research at the National Security Archive at George Washington University and director of the Iran Documentation Project there, Byrne has followed the scandal since it broke. Now drawing on previously inaccessible documents, including the personal notes of Caspar Weinberger, Charles Hill, and George H. W. Bush, he paints a compelling picture of a scandal with Reagan at its center. The president may have been inattentive to the details of certai