The Loneliness of the Black Republican: Pragmatic Politics and the Pursuit of Power, Leah Wright Rigueur 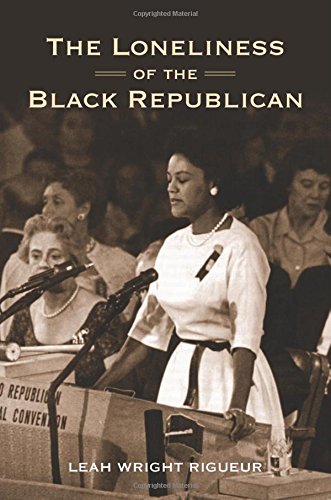 Leah Wright Rigueur has produced a comprehensive examination of black Republicans’ efforts to shape the direction of the GOP between 1936 and 1980. The book provides critical insight into an often discussed but little understood group. Black Republicans fascinate because their partisan choice is so out of line with our expectations of black political behavior. The unexpectedness of their partisanship challenges the associations we have about racial identity, black interests, and the reputations of the two major political parties. Those associations leave black Republicans with a complicated and often troubled reputation: they are seen as sellouts on the left but heralded as heroes on the right. Rather than rehash this reputation, Rigueur sheds light on the experience of being black and Republican. The book shows that experience is often defined by the challenge of reconciling black racial identity with Republican partisanship.

A key contribution of the text is an illumination of the differences among African American Republicans. Rigueur documents a range of attitudes and behaviors among black Republicans, despite their small numbers. While notions of black respectability motivate most of their efforts, black Republicans come in all varieties: liberal, conservative, and neoconservative. They have differences based on their ideology as well as the ext