Lives in the Balance: Asylum Adjudication by the Department of Homeland Security, Philip G. Schrag, Andrew I. Schoenholtz and Jaya Ramji-Nogales 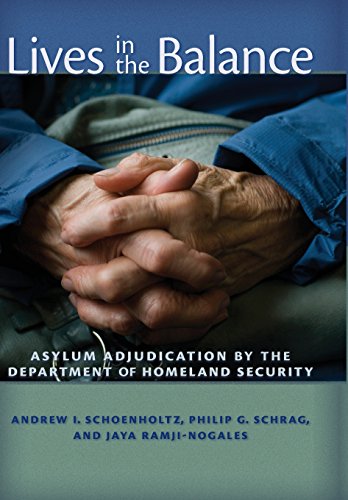 The United States is obligated under international law to provide protection to individuals fleeing persecution and torture in their home country. When an individual asks for that protection in the form of asylum, the legal process that he or she faces most often starts in a very small division of the U.S. Department of Homeland Security (DHS) known as the Asylum Office. There, asylum officers in eight regional offices must contend with horrific stories of abuse, increasingly complicated and restrictive legal standards, and far too little time to devote to decision making. However, the consequences of asylum decisions are enormous. The erroneous denial of an asylum claim can lead to the return of a bona fide refugee to a country where his or her life or freedom is at risk.

In Lives in the Balance, authors Andrew I. Schoenholtz, Philip G. Schrag, and Jaya Ramji-Nogales comprehensively analyze, for the first time, a database of more than 380,000 asylum applications filed with the DHS from 1 October 1995 to 8 June 2009, leading to valuable insights and policy recommendations. The data in this book are a distillation of exhaustive data compiled at an accompanying Web site and builds on work done by the same authors in an earlier book, Refugee Roulette: Disparities in Asylum Adjudication and Proposals for Reform. The analysis in Lives in the Ba