In It to Win: Electing Madam President, Lori Cox Han 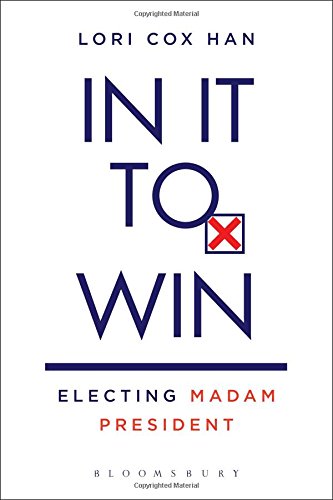 What will it take to elect a woman president? As we consider the first presidential election to feature a major-party female nominee for president, this question is particularly relevant. But, as Lori Cox Han outlines in In it to Win: Electing Madam President, our knowledge of how gender informs this presidential election is relatively limited. Han’s text provides an overview of the literature to date on women in both American politics and presidential elections, seeking to synthesize these literatures in a way that more clearly illuminates the degree and ways in which gender shaped campaign strategy and electoral outcomes in 2016.

Writing for a general audience that may be new to these topics, Han summarizes the major findings in both literatures in an accessible way, also relying on public analyses from journalists and practitioners for firsthand insights into presidential politics. In the book’s first chapter, Han identifies two primary research questions: “Does a woman candidate need a unique strategy to run for president? Or, does a winning strategy already exist that can apply to a candidate regardless of gender?” (p. 4). The book moves the reader through each stage of a presidential election, from candidate emergence and the invisible primary to the nomination process and general election, to try to answer these questions.

Unlike other volumes dedicated to analyzing the potential for a female president, gender is not the primary lens for analysis throughout this volume. In some sections, Han relies more heavily on the campaign and presidency literatures to explain the major forces at play at each electoral stage. For example, Han’s chapter on the general election spends the most time on institutional dynamics such as campaign finance, the electoral college, and partisanship among voters—all factors that she argues matter more in electoral outcomes than candidate gender.

This approach is valuable in noting the importance of context, institutional processes, and factors other than gender in the complex processes of presidential politics. However, in arguing that gender is unlikely to be determinative to electoral outcomes, Han misses some opportunities to illuminate where gender influences the processes that yield those outcomes and/or interacts with the factors deemed most influential. Greater inclusion of the literature on gendered institutions would complement and contribute to this analysis, as it demonstrates the particularly strong gendering of executive offices, especially the presidency. Additionally, this literature provides reminders that gender shapes the expectations, strategies, and behaviors of women and men. In other words, is the “winning strategy” sought in Han’s initial question inherently masculinized?

Relying primarily on women’s presidential and vice presidential candidacies in the most recent elections—Hillary Clinton, Michele Bachmann, and Sarah Palin—Han finds no single answer to her research questions about how women can win the presidency. Instead, she concludes, “it’s complicated” (p. 166). While optimistic that presidential elections have become friendlier to women candidates, she demonstrates that gender continues to pose some distinct barriers to women’s presidential success. Moreover, she argues that the evolving gender dynamics of presidential politics are just some among many stars that must align to see the election of our first woman president.

In it to Win provides a foundation upon which to evaluate the gender evolution of presidential elections, assess candidate strategies, and identify the most significant factors—including gender—shaping the primary and general election process and outcomes. Leave it to the next edition to determine what 2016 taught us about electing madam president.