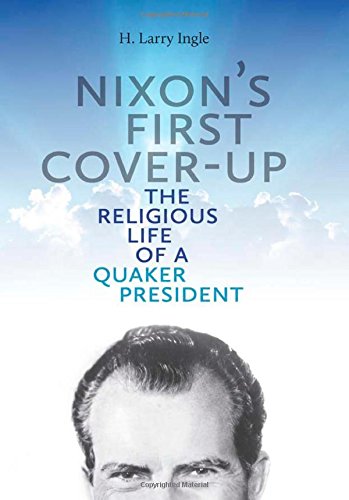 It is well known that throughout U.S. history, members of the Religious Society of Friends, or Quakers, have often engaged in political discourse and policy debate over war, antislavery, and human rights, yet there has been little scholarship on Quakers and presidential leadership. H. Larry Ingle’s new book, Nixon’s First Cover-Up: The Religious Life of a Quaker President, provides an intriguing account through impeccable research and even better writing of one of the most enigmatic and controversial presidents in U.S. history—Richard M. Nixon—and his underlying Quaker faith. Ingle draws on and challenges Nixon biographers, who, he argues, misunderstood the impact of religion in Nixon’s decision-making process, by reinterpreting Nixon’s own published works and personal and political correspondences. Ingle uniquely focuses on Nixon’s often ignored, or just completely forgotten, “Quaker heritage,” which arguably informed his personal character, leadership style, and broader political life.

As a Quaker historian, Ingle takes on Nixon’s well-known legacy of engaging in secretive politics by revealing how and why the former president, and “birthright Friend,” infused religious ideas into his politics and policymaking activities. Scholars have always known about Nixon’s tendencies