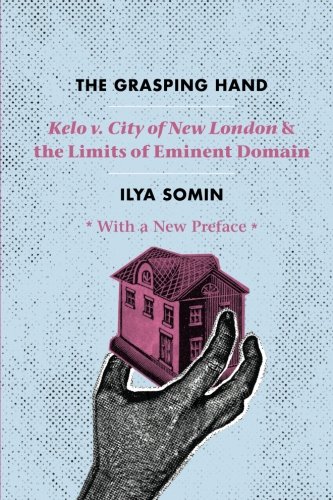 In 2005, the U.S. Supreme Court by a 5–4 vote allowed the New London Development Corporation to take Susette Kelo’s little pink house, along with those of her neighbors who took part in the constitutional challenge that bore her name. Legal scholars were unsurprised by the decision, but ordinary Americans across the political spectrum were outraged by the endorsement of local government’s power to seize their homes.

A decade later, Ilya Somin presents a comprehensive, well-organized case for the strict federal constitutional constraints on state and local use of eminent domain that the Kelo majority declined to impose. More particularly, Somin argues that, properly understood, the Fifth Amendment’s public use clause, as applied to the states through the Fourteenth Amendment, prohibits them from seizing privately owned property for transfer to other private entities in the name of economic development. He seeks to sway his readers by educating them: first about the circumstances of the Kelo litigation, then about the history of public use clause jurisprudence, and finally about the aftermath of the Kelo decision.

Somin begins with a fairly balanced view of the parties involved in the development plan dispute that went all the way to the U.S. Supreme Court. This evenhanded tone eases the open-minded re