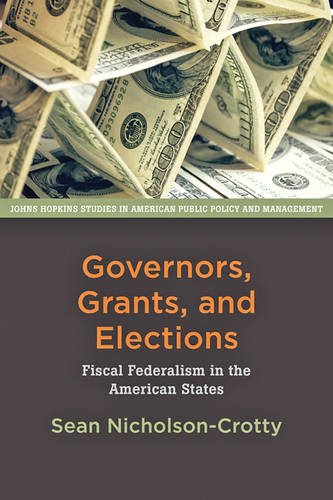 The most visible consequences of the 2010 Republican wave, which installed conservative Republicans in governor’s mansions across the country, was the decision by many of these executives to refuse federal funding for high-speed rail and oppose the expansion of their Medicaid programs under the Affordable Care Act. As Sean Nicholson-Crotty shows convincingly, these dynamics were neither unique to 2010 nor limited to the most high-profile policies.

Using a variety of data, Nicholson-Crotty documents how the political calculations of state officials shape every aspect of state–federal interactions in the administration of intergovernmental aid. Partisanship affects state decisions to apply for grants, how the money is ultimately used, how federal funds are targeted to legislative districts, and whether governors subsequently claim credit for their grantsmanship. Nicholson-Crotty looks in every metaphorical nook and cranny for evidence of strategic behavior and, in almost every case, finds it.

Combining his encyclopedic knowledge of federal grant programs with a
series of quantitative analyses, supplemented with interviews of political operatives, the author builds a theoretical model about how states interact with the national government in their pursuit of intergovernmental aid. The first part of the argument is that governors&mdas