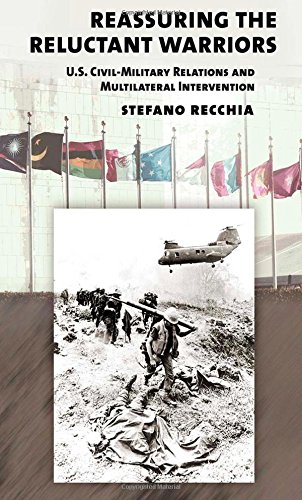 What is the role of civil-military relations in the pursuit of multilateralism? Reassuring the Reluctant Warriors wades into a large body of literature on multilateralism, arguing that a central reason countries such as the United States value multilateral approval for military operations is that it affords comfort to military leaders who want to avoid open-ended and costly unilateral uses of force. Civilian leaders are often forced to seek multilateral approval in order to assuage their generals, necessary partners in achieving their foreign policy goals.

The book provides an excellent synthesis of ideas from the study of bureaucratic decision making, organizational behavior, intra-agency politics, and foreign policy decision making, creating a coherent theory of the benefits of multilateral approval. Building on classic work on the military, Stefano Recchia argues that military leaders are by nature relatively conservative about the use of force, and this pragmatism sometimes constrains more intervention-oriented civilian leaders. Civilian “interventionist hawks,” as Recchia labels them, are often motivated by the promulgation of liberal democratic ideals but are not intrinsically driven to seek multilateral approval. In fact, for reasons of autonomy and expediency, they would often rather bypass multilateral channels. However, multilater