Family Values and the Rise of the Christian Right, Seth Dowland 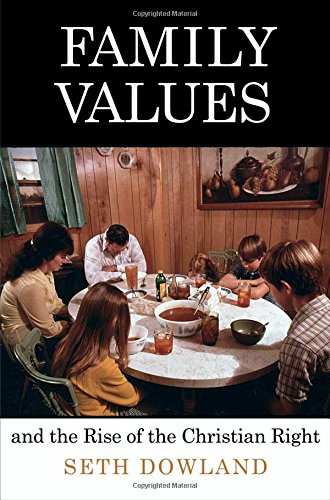 Moving beyond party politics, Seth Dowland articulates the recurring importance of family politics in the American political arena. While many who study the Christian right start with its more obvious rise in the 1970s, Dowland looks back to the history of values in American politics and the ownership of family values rhetoric by the Christian right starting in the 1960s. The main premise of the book is that while individual issues come and go from the political arena, family values have become (p. 9) and remain (p. 228) an important component of American politics.

In order to make this case, the book is broken down into a discussion of the political issues facing three broad areas of the family for conservative Christians (p. 17): children, mothers, and fathers. Enrollment in private Protestant schools more than doubled from 1970 to 1980 (p. 23). Christians were unhappy about Engel v. Vitaleem (1962), but they were equally unhappy about forced busing, the lack of respect for authority, and the general sense that secularism had invaded America’s schools. Thus, Christian schools (Chapter 1) and homeschooling (Chapter 3) became prominent ways for those among the Christian right to fight against a shifting culture. Christians also fought against textbook changes that were deemed un-American. A growing disdain for experts (p. 63), coupled with rhetor