Taxing the Rich: A History of Fiscal Fairness in the United States and Europe, Kenneth Scheve and David Stasavage 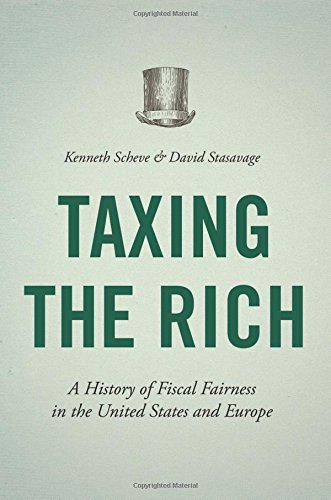 The rise of income inequality has increased scholarly focus on the politics of redistribution. This literature regularly examines how the distribution of government services and benefits assuages (or does not assuage) the growing income gap in Western societies. However, there has been much less focus on the taxation side of the redistribution equation, to the detriment of our understanding of the politics of income inequality. This sin of omission is especially important given that rising inequality is driven primarily by gains at the very top of the income distribution.

Kenneth Scheve and David Stasavage provide a compelling and timely analysis of the politics of who pays what, when, and how. This theoretically driven and empirically rich book is important for scholars of political economy, comparative politics, tax policy, income inequality, and public policy.

In the new Gilded Age, can we look to that past in order to understand the political forces that resulted in the rich paying “their fair share”? The authors use a diverse set of methodological tools to examine the tax policies of more than 20 countries for two centuries. Scheve and Stasavage examine various explanations for when and why governments have taxed the rich, with a focus on three conceptions of fairness.

The authors assess and dismiss major arguments for progressive taxation such as increased suffrage (mixed evidence) and rising income pretax inequality (no evidence). The authors find the most support for the compensatory theory: higher progressive taxes are justified to compensate for other government advantages enjoyed by the rich.

The largest increases in taxation coincided with the mass war mobilization efforts leading up to World War I and World War II. Scheve and Stasavage conclude from textual analysis of legislative bodies that governments acknowledged the trade-off of young, mainly poor men sacrificing for their country in return for higher taxes on the rich, which generated the machinery of war. In most of these countries, the move toward more progressive taxation during the war efforts stayed in place for the decades after World War II, although it is not exactly clear how taxes were able to remain so high for so long. The authors go on to argue that the military and international conditions of the twentieth century that produced higher taxes on the rich have been made obsolete. There are no longer Faustian bargains (along mass mobilization lines) to be made that could increase taxes in the future.

The argument about when taxes became more progressive is more convincing than the evidence for citizens’ attitudes driving the changes to tax policy. First, the authors admit that there are limited amounts of quality public opinion data on preferences for tax policy over time. Therefore, we are left with the assumption that elite rhetoric about conscription is a reflection of legislators perceiving and communicating mass sentiment as justification for more progressive taxation. Second, there was no satisfactory explanation for why counties that did not mobilize for the great wars raised taxes on the rich at nearly the same rates as those that did. Third, in the case of World War II, the rich fought and died at similar rates to the working classes.

Altogether, Scheve and Stasavage provide much to consider about taxation and inequality going forward. If the authors are right about compensatory arguments, then what if modern perceptions of unfairness are related not to war profiteering but rather to the tax system itself? Why would voters expect politicians who rigged the game through the tax system to turn around and address rising inequality through higher taxes on the rich?