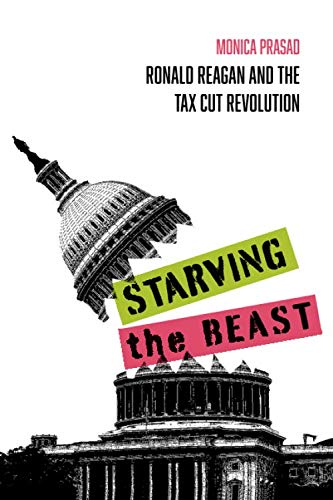 Why has the Republican Party centered its domestic agenda around tax cuts for three decades? Monica Prasad presents a thorough, complicated, and convincing story of the political motivations and impact of Ronald Reagan’s Economic Recovery Tax Act (ERTA) of 1981. Starving the Beast argues that the ERTA marked the transformation of the Republican Party from a party of fiscal responsibility to one of tax cuts. Reagan showed his fellow Republicans that running on tax cuts was not only electorally popular but came with no economic or political costs. Republicans could now distribute government benefits through the tax code as a counter to Democratic expansions of the welfare state. This strategy united disparate factions within the party and is still one of the GOP’s only popular policy positions.

Prasad argues that the political and economic environment of the late 1970s provides the context for the success of the ERTA. The Republican Party’s reputation was in ruins after Watergate, and party elites were desperate for a winning electoral message that could challenge Democratic congressional control. A period of high inflation resulted in bracket creep, moving households into higher tax ranges and eroding consumer purchasing power. Reagan’s response to voter concerns about the economy was the ERTA, which focused on cutting individual marginal rates for three consecutive years. President Reagan championed the ERTA as a rationale for the economic recovery leading up to the 1984 election, while Democrat Walter Mondale promised to raise taxes. Reagan won in a landslide and, although not causal, the link was established between promising lower taxes and Republican electoral success. Every Republican presidential nominee since has made tax cuts a central part of their campaign platform.

The most effective part of Prasad’s argument is evaluating and dismissing popular theories for why Reagan adopted the ERTA despite public concern about how tax cuts would worsen the deficit. First, public opinion polls at the time did not show consistent and overwhelming support for tax cuts. Reagan had to continually link the tax cuts to addressing government waste and fraud as well as a solution to a sluggish economy. Second, Reagan and his advisers were suspicious of the supply-side arguments for tax cuts and did not fully embrace the idea that rate reductions would lower the deficit either in private or on the stump. Third, not only did the business community not instigate the individual tax cuts, major business interests had to be sold on the ERTA. Businesses were worried that a large tax cut for individuals would result in a host of negative economic outcomes and were more concerned about the accelerated costs recovery system. Fourth, there is little evidence that the ERTA was part of a “starve the beast” strategy of purposely running deficits so as to shrink the welfare state. Reagan ended up increasing taxes twice due to deficit concerns in his first term. Prasad also finds weak evidence for the argument that Reagan’s tax cuts were a dog whistle to racially resentful voters that government support was ending for racial and ethnic minorities. The most important insight here is that previous accounts of Republican tax cutting overstated the influence of business interests and the wealthy.

Prasad examines tax policy through a comparative lens, noting that the U.S. consumer economy produced higher levels of overall taxation and regulation than in Europe. The European bargain allowed for a generous welfare state in exchange for low taxation and regulation of capital. The U.S. tax system’s reliance on capital, income, and profit taxes resulted in higher inflation, pushing up tax levels and placing tax policy on the national agenda. It is not clear how these international comparisons affected Republicans’ political calculations.

Taxing the Rich: A History of Fiscal Fairness in the United States and Europe, Kenneth Scheve and David Stasavage Reviewed by Christopher Faricy