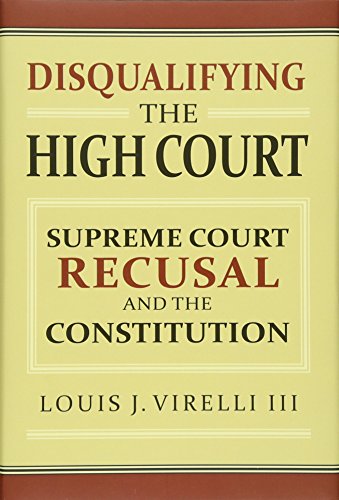 After the U.S. Supreme Court agreed to issue a ruling on same-sex marriage in what would become the Obergefell v. Hodges (2015) decision, there were a number of calls for Justice Ruth Bader Ginsberg to recuse herself from the case because of previous statements she had made publicly suggesting her sympathy for marriage equality. Justices Clarence Thomas and Elena Kagan had also faced calls to remove themselves from the first Affordable Care Act case, NFIB v. Sebelius (2012), although, like Ginsberg, neither agreed to step aside. These widely publicized disputes have resulted in increased public interest in the long-established judicial principle of recusal, in which a judge removes himself or herself from considering a case because of some actual or perceived conflict of interest.

Louis J. Virelli III's new book is therefore timely and addresses a topic that has been all but ignored by political scientists. While the same cannot be said of the legal academy, where one finds a number of important law reviews on the topic, the social science literature on recusals can charitably be described as thin. This oversight is particularly unfortunate given the fertile ground it presents for the consideration of a host of important political, legal, and constitutional questions, as the author ably demonstrates.