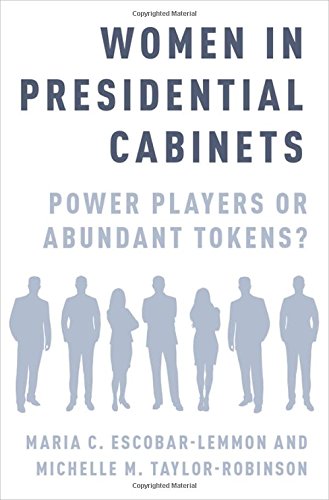 As the number of women in cabinet positions has increased worldwide in the twenty-first century, the question of how meaningful these types of appointments are for women's political representation and advancement has yet to be comprehensively answered. It is often speculated that women appointees are less qualified, lack the necessary experience, and are merely appointed as symbolic tokens for governments to pay lip service to equality. Maria C. Escobar-Lemmon and Michelle M. Taylor-Robinson's contribution sets out to change that, using empirical systematic data. The authors ambitiously and meticulously examine not only how and where women are appointed to cabinets but also the skills and qualifications that men and women ministers bring to the table. Their findings demonstrate that women are now part of the decision-making process in the executive branch, in most cases, no differently than men.

Using empirical analysis from five presidential democracies (Argentina, Chile, Colombia, Costa Rica, and the United States) Escobar-Lemmon and Taylor-Robinson walk us through the possible integration and incorporation of women in cabinet positions in these countries. To understand the true contributions of female cabinet members, they focus their analysis on the type of political capital resources (PCRs) women may bring to the administration. The authors then analyze the three types of PCRs (policy expertise, political skills and experience, and support resources) across all cabinet posts to assess whether women are as likely as men to have the resources to be just as powerful in executive positions. Their findings suggest that regardless of the type of post they hold, women ministers do not differ from men in the types and number of PCRs they provide to the administration. One exception to these findings is in the broad economics category, where women lack extensive portfolio-related experience as well as links to business, but, as later presented, this does not seem to affect their success in those positions.

To go a step further, the book also engages with the effectiveness of men and women appointees in the presidential cabinets analyzed. If men and women are equally bringing the same type of qualifications, they should also be equally incorporated as political actors. Escobar-Lemmon and Taylor-Robinson develop a set of benchmarks to assess whether women are treated equally to men and whether they are equally successful in their posts. The type of post they occupy, the length of service, how they exit the post, and legislative productivity are all factors they use to understand how effective women and men are in presidential cabinets. The authors conclude that women are equally as effective as men across the different portfolio categories as well as in each of the countries under study, even when they lack PCRs, as in the case of Colombia, suggesting evidence of genuine incorporation of women in cabinet positions.

The book makes an excellent contribution to our understanding of the gendered nature of political institutions. While the authors find that men and women are treated equally once women have the same qualifications, expertise, and experience as men, they do provide evidence that in order for women to enter powerful and diverse posts in the executive branch, “they typically need to look like men” (p. 275). Male standards are still the acceptable benchmark for breaking into top executive posts.

This nuanced and comprehensive analysis will serve to encourage further examination of executive appointments in other regions of the world, bringing to light the institutional dynamics that have evolved to allow men and women to equally access political power.