The Courts, the Ballot Box, and Gay Rights: How Our Governing Institutions Shape the Same-Sex Marriage Debate, Joseph Mello 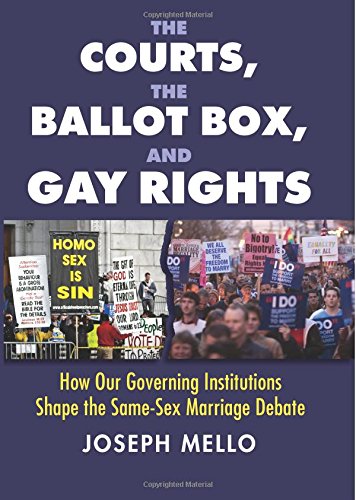 Scholars, activists, and political actors generally agree that focusing on rights claims is one of the key ways that marginalized groups can articulate political grievances, mobilize movements, and, ultimately, achieve successful outcomes in American politics. The near-axiomatic power of rights in both social science scholarship and political practice stems from the perceived successes of the black civil rights movement, which demonstrated that claims to rights could be used to influence significant political changes, either through the courts or legislation, and thus provide a pathway to full standing for members of oppressed groups.

Perhaps owing to this focus on the gains of the civil rights movement, political scientists have paid less attention to what happens when two different groups engage in public conflicts over rights, as in the case of proponents and opponents of same-sex marriage. In The Courts, the Ballot Box, and Gay Rights, Joseph Mello examines these conflicts over same-sex marriage and extends the study of rights claims and minority groups in a useful direction, asking under what circumstances rights discourse might be used by political actors to advance the interests of one group at the expense of another. Using a mixed-methods approach that combines quantitative content analysis with two indepth case studies of same-sex marriage bat