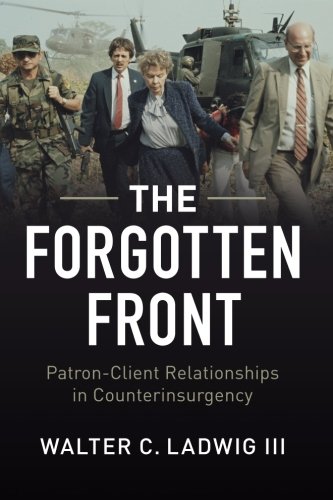 An enduring puzzle in international relations is why great powers often struggle to bend small allies to their will, despite the allies’ dependence. This paradox is evident in counterinsurgency campaigns in which embattled governments rely on assistance to survive, yet they are intransigent in the face of their patron's demands for reform. Walter C. Ladwig III explores the sources of patron influence in a meticulously researched new book. He argues that behind noncompliance lurks misaligned interests. The United States mistakenly believes that its interests are aligned with the client—after all, both want to defeat the insurgents—but the client often has divergent interests that clash with U.S. counterinsurgency prescriptions. Bringing interests back in line along this “forgotten front” (p. 7) is the key to influencing client behavior.

Ladwig frames his argument in agency theory, characterizing the patron as a “principal” that delegates counterinsurgency tasks to an “agent” in exchange for compensation (that is, economic and military assistance). The best way to ensure that the agent complies is to structure its incentives such that it is better off serving the principal's interests. Incentives can be structured in two ways: inducement, which uses rewards to encourage the desired action, and conditio