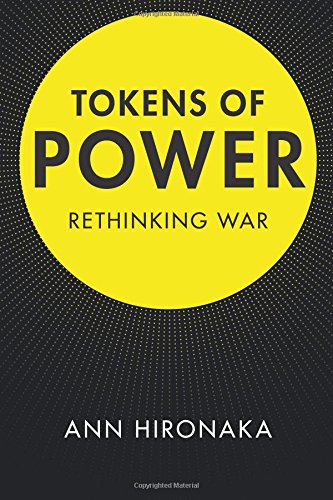 Ann Hironaka explores why states choose to fight in spite of an international history so riddled with costly military disasters. The title of the book, Tokens of Power, gets at one possible answer—that the material elements of war are secondary to the symbolic value of victory and the high international status that victory can provide. Much of the analysis in the book points to another answer: that decision makers are routinely duped by the belief that war provides an accurate measure of relative power and that they can therefore learn lessons from the past in order to become more powerful and invincible in the future. The book attempts to weave these two seemingly disparate answers together by arguing that the pursuit of status, which so often takes the form of military competition, arises because power and the meaning of war are ambiguous.

This book joins a number of recent works on the topic that argue that the extreme costs of war are often outweighed by the value states place on being assigned a higher position within the status hierarchy. Hironaka argues, like Scott Sagan, Lilach Gilady, and Barry O'Neill before her, that states often pursue material objects, such as nuclear weapons and aircraft carriers, not for their strategic value but because these material factors are markers of the status a state seeks to hold. In these arguments,