Latino Identity and Political Attitudes: Why Are Latinos Not Republican?, Angel Saavedra Cisneros 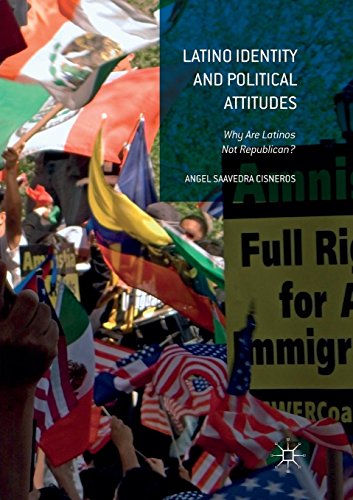 Choosing a subtitle is a deceptively simple task. How do you relate the nuance of the book in fewer than 10 words and grab the reader? Angel Saavedra Cisneros succeeded in this task with the provocative subtitle of his new book: Why Are Latinos Not Republican? Following the 2016 election, the answer to this question may seem blatantly obvious, but Cisneros presents a compelling case for why Latinos are so strongly tied to the Democratic Party and why the hopes of some in the Republican Party to attract Latinos are rarely fulfilled.

This is a timely book for two reasons. The first is the remarkable debates about the constitutional, legal, and policy basis of immigration in the United States that started during the campaign of Donald Trump and have persisted long into his administration. The second is the theoretical argument that Cisneros makes about social identity formation, a concept that many political scientists are now wrestling with. The result is a must-read for those interested in how multiple identities come together to align with partisan identity as well as those interested in Latino and immigrant politics.

Cisneros builds his case using survey data collected during the immigration protests from 2006. These data allow him to test the waxing and waning salience of immigration policy for Latinos, a group that cares about immigration but not always to the extent that outsiders assume. Using these data and others, Cisneros finds several things about what binds Latinos to the Democratic Party: (1) there is such a thing as Latino identity, which breaks into two dimensions: Latino solidarity and the strength of that identity; (2) immigration is not what drives Latinos toward the Democratic Party; (3) economic and spending issues, rather than social issues and religion, are most important in explaining Latino partisanship. Overall, the book shows that Latino identity is real and meaningful for understanding political attitudes and partisanship.

These findings are not especially surprising, though they are documented with rigorous statistical methods. What is most telling about the book is what it says about the future. The assumption of the book is that the immigration issue rises and falls in salience over short periods, often associated with protests. But what happens when the issue defines a presidency and a determined political movement out to rewrite the rules on how the country accepts newcomers?

The Trump administration is running a painful test of the book's key findings. If, in the past, immigration issues did not predict Latino partisanship, will the Trump administration, and its rabble of anti-immigration and anti-immigrant supporters, alter the core social identity of Latinos? Hopefully, a follow-up book, subtitled Why Latinos Are Still Not Republican, is in the works by the author.