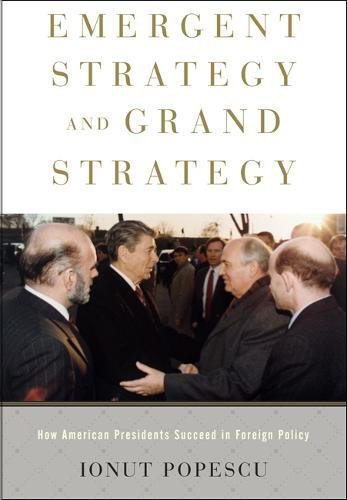 It is a common complaint among scholars of international relations that the United States lacks an overarching grand strategy. At least since the end of the Cold War, the argument goes, U.S. leaders have failed to put in place a grand strategic design suited to the modern era, leading to ambivalence over the proper ends and means of U.S. foreign policy. As a result, the United States is adrift on the world stage.

In Emergent Strategy and Grand Strategy, Ionut Popescu tackles this conventional wisdom that the United States is hamstrung in foreign policy as long as it lacks a grand strategy. Popescu argues that while it is true that some past presidents crafted foreign policy choices on the basis of fixed designs (grand strategy), others allowed their approach to evolve in response to political conditions at home and abroad (emergent strategy). In this book, Popescu offers an evaluation of these opposite models of decision-making: does the United States enjoy more success when its leaders adhere to set plans or when they remain open to adaptation?

Overall, Popescu finds that “while both models of decision-making have had positive results at different times, neither one is able to consistently lead to successful strategic performance” (p. 166). At first glance, this might appear an unsatisfying contribution around