When the Senate Worked for Us: The Invisible Role of Staffers in Countering Corporate Lobbies, Michael Pertschuk


Reviewed by James A. Thurber 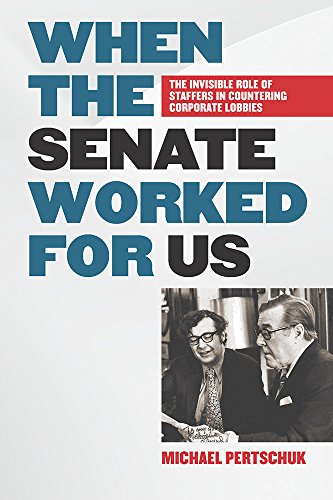 Preparing for an interview to work for Senator Warren G. Magnuson in 1973 as an American Political Science Association Congressional Fellow from Washington State University, I became immediately aware of the reputation of the much-admired Mike Pertschuk, Democratic staff director of the Senate Commerce Committee chaired by the senator. Although I accepted a position with Senator Hubert H. Humphrey, I watched the extraordinary role that Mike played in the Senate. Pertschuk's book is a rare behind-the-scenes account of the extraordinary role of an entrepreneurial Senate Commerce Committee staff (of almost 40) that pushed for progressive public interest legislation throughout the 1970s and 1980s in consumer protection, public health, environment, energy, and almost every area of economic life in America.

The creed of successful congressional staff then was to hide your name, and especially to stay out of the press. The less the media and the voters learned of the role of staff in serving elected public officials, the more credit and reelection currency they accrued. That thinking held for Mike for almost 50 years, until he decided to break it and boldly reveal the central role of staff in the politics and policy of the Senate.

This is an informative and inspirational book, with a large dose of humor, about the role of congressional staff during a go