Challenged Hegemony: The United States, China, and Russia in the Persian Gulf, Steven A. Yetiv and Katerina Oskarsson 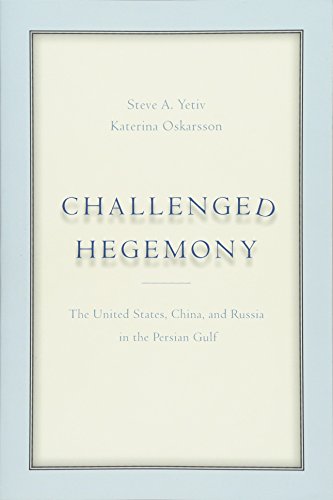 At a time when discussions of American decline are having one of their episodic comebacks, this book makes the very sensible argument that America's strategic position in the Persian Gulf region is stronger than it was 40 years ago, both in absolute terms and in comparison with potential great-power challengers China and Russia. American military power in the region is unrivaled by local or global competitors and much greater than it was at the time of the Iranian Revolution or Saddam Hussein's invasion of Kuwait. While Russia is a regional rival, it is much weaker than the Soviet Union was in the Gulf, lacking the strong alliance relationship that the Soviets had with Baathist Iraq. China, a global challenger, has little reason to contest American power in the area, as Beijing wants the same thing from the Persian Gulf that the United States does—the free flow of oil. America's power in the Gulf is so great, the authors contend, that it can even do really dumb things like invade Iraq in 2003.

But does all this amount to hegemony? Steven A. Yetiv and Katerina Oskarsson define it purely in terms of capabilities, as a synonym for unipolarity, arguing that the United States is certainly the regional hegemon when one considers military power, economic ties, and diplomatic weight. But if hegemony does not also mean successful regional management, does the term have much analytical weight? The authors argue that American hegemony has maintained oil security since the early 1990s, when its hegemony was established by the end of the Cold War and its triumph in the Gulf War. Before that, oil security had been disrupted by the 1973 oil embargo, the 1979 Iranian Revolution, the Iran-Iraq War (1980–86), and the 1990 Iraqi invasion of Kuwait. No such shenanigans since. But that does not mean that all has been quiet on the oil front. American hegemony did not prevent prices from reaching historic highs in the early 2010s—much higher than in the 1980s, during the Iran-Iraq War. One might even argue that, as a hegemon, the United States has done more to disrupt the free flow of oil since the 1990s than any other country, by sanctioning and then invading Iraq and by sanctioning Iran, contributing to the price run-up of the 2000s.

Given the failures of the United States to establish a stable order in post-Saddam Iraq or to bring the Islamic Republic of Iran to heel, the authors are forced to argue that hegemony “cannot easily translate into influence” (p. 176) and that hegemony “does not preclude regional chaos” (p. 185). American hegemony “has not done much to stem domestic instability in the region and has probably stoked it” (p. 177). With Iranian influence paramount in Iraq, ISIS and al Qaeda still active players in the region, and American allies Saudi Arabia and the United Arab Emirates engaged in a debilitating and morally compromising conflict in Yemen, hegemony is certainly not producing the results that Washington wants.

This useful book would have been even more persuasive had it tackled the question of how dominant material capabilities do and do not translate into actual ability to direct regional affairs. That is what sets hegemony apart from unipolarity. An instructive comparison might have been with Great Britain, similarly a Persian Gulf hegemon in the interwar period, which had a much better track record in regional management.

The United States and Egypt: An Essay on Policy for the 1990s, William B. Quandt Reviewed by F. Gregory Gause III