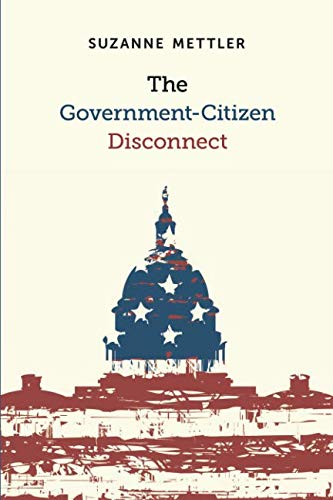 Much research posits a “disconnect” between the public and government. This work focuses primarily on the behavior of politicians and the mismatch between their policy actions and citizens’ preferences. Suzanne Mettler’s book concentrates instead on the public and the degree to which people accurately perceive and appreciate what government does. This book complements her earlier work Submerged State, which delineated how many government policies, such as tax expenditures, are not visible to many citizens, which distorts their views. The Government-Citizen Disconnect, by contrast, examines how experience with government policies influences what people think.

Mettler poses a paradox between declining trust in government and a growing role for government in people’s lives in the United States and then attempts to explain it. Her hypothesis is that group interests and identities have overridden personal experience as sources of public perceptions, and most of the book traces the empirical evidence. Mettler sets the stage by recognizing the downward trend in trust in government and detailing the expanding role of government over time, emphasizing that “we are all beneficiaries.” She then turns to survey data collected in 2008 as part of her Social and Government Issues and Participation (SGIP) Study. Included there are items relating to political attitudes (and participation) and experiences with various federal government programs.

The SGIP data allow interesting analyses of people’s experiences with government and their correlates. Mettler reveals that the larger the number of means-tested programs a respondent reports using, the (much) more likely the person is to agree that government social programs have helped in times of need. She demonstrates a similar effect for users of specific programs, particularly those that come in the form of payments, such as the former Aid to Families with Dependent Children program, in comparison with those embedded in the tax code, such as the earned income tax credit. She also shows that beneficiaries of certain higher education policies, namely, the GI Bill and Pell Grants, are more likely to agree that the government has provided opportunities to improve people’s standard of living.

Ironically, these findings all support a government-citizen “connection,” not a disconnect. People notice that what government policy does is important, as it is necessary for both the positive policy feedback that Mettler acknowledges— and challenges—and the negative, thermostatic feedback that is critical to effective accountability and control that the author misses. As described earlier, the connection varies across programs depending on their visibility, and so it is not perfect, which is as we would expect, given the importance of salience in research on policy feedback and responsiveness.

What is important to Mettler is that the apparent connection does not translate into increased efficacy or political participation. She finds that people who use government programs are more likely to say that government “doesn’t care” about them and that “people like me don’t have much say.” They also are less likely to participate in politics. These results form the basis of Mettler’s government-citizen disconnect, in which experience and views of government seem to be at odds. (She does not examine trust per se.) She also finds that efficacy and participation are driven at least as much by sociodemographics, especially race, education, and income. The concluding chapter considers ways forward, pinpointing enhanced educational and job opportunities and renewed bonds of citizenship.

The book is interesting and engaging, and it contributes useful findings about the connection between the federal government and citizens in the United States. It reinforces the growing understanding that public awareness varies across programs while shedding additional light on how and why. This is worthwhile and what most recommends the book, not the documentation of a pervasive disconnect, which it does not provide, or an accounting of trends in public attitudes, which it really cannot provide. The book may inform research on what has happened over time, and that is to the author’s credit, to be sure.

When Do the Rich Win?, Christopher Wlezien

American Public Opinion, Advocacy, and Policy in Congress: What the Public Wants and What It Gets, Paul Burstein Reviewed by Christopher Wlezien

Abortion Rates in the United States: The Influence of Opinion and Policy, Matthew E. Wetstein Reviewed by Christopher Wlezien