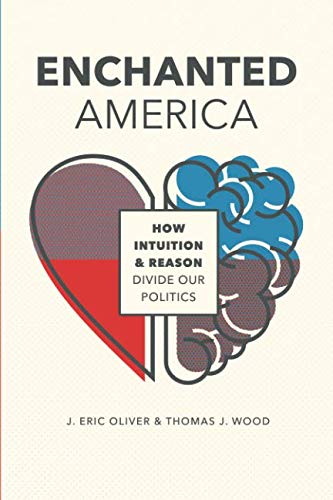 Since the 2016 U.S. presidential campaign, America has, by many popular accounts, been propelled into a new and deeply troubling “age of alternative facts” and “age of conspiracy theories.” This modern America, the story goes, is one where polarized political agents are at war for the minds of the masses, a malleable group whose beliefs and orientations are susceptible to the persuasive forces of misinformation and conspiracy theories.

Entertaining as this narrative is, J. Eric Oliver and Thomas J. Wood seek to provide a more robust account of recent developments in American politics, with a focus on individual psychological tendencies and the consequences of human reliance on emotions for information processing and belief construction. In their exploration of Americans’ epistemological relationship with truth and science, they are able to see past a polarized America, toward an “enchanted” one.

According to Oliver and Wood, the key division in the American mass public is not between liberals and conservatives, or Democrats and Republicans, but between “rationalists” and “intuitionists.” Intuitionists, unlike rationalists, who use “thoughtful deliberation or detached observations” to make se