Who Fights for Reputation: The Psychology of Leaders in International Conflict, Keren Yarhi-Milo 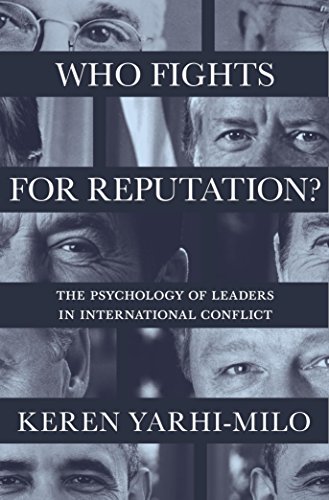 Each of the last several years, I have taught an undergraduate senior seminar on the political psychology of international security. Over the course of the semester, we cover many of the canonical texts in the field. Keren Yarhi-Milo’s work is increasingly taking up more real estate on the syllabus. Her most recent book, as the students picked up on, is in one sense the logical extension of her previous work on the role of individuals, and the interactions among them, in foreign policy. In Knowing the Adversary: Leaders, Intelligence, and Assessment of Intentions in International Relations, Yarhi-Milo argued that perceptions derived from diplomacy—specifically, face-to-face personal diplomacy by leaders—are just as salient, if not more, than other markers of state intentions, such as costly signaling. Leaders often change their beliefs on the basis of information gathered in these personal dyadic settings. In that book, the emphasis was on interaction, and the book contributed, in masterful fashion, to a renaissance in diplomatic studies in American positivist international relations scholarship.

One of the crucial questions that the book left us with is how we can explain variation among leaders. After all, some leaders easily and quickly update