Learning to Forget: US Army Counterinsurgency Doctrine and Practice from Vietnam to Iraq, David Fitzgerald 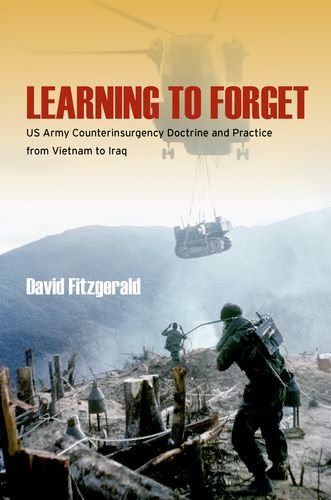 The Vietnam War has cast a long and enduring shadow over the U.S. Army. In this study of how the U.S. Army conceptualized the defeat in Vietnam and then reimagined counterinsurgency doctrine in later decades, David Fitzgerald has unpacked the intellectual framework underpinning the shad­ow wars of the 1980s and 1990s and the more‐recent military ventures in Iraq and Afghanistan. Despite the desire to bury the ghosts of Vietnam, they continue to haunt the American military, with intense and unresolved debates over why the war was lost and what lessons should be drawn from that defeat.

During and after the war in Vietnam, Army officers hotly disputed if improved counterinsurgency methods had any impact on the conflict, and whether the thesis that General Creighton Abrams introduced a “better war” after the 1968 Tet Offensive was merely a chimera that hid a darker reality that the war was unwinnable from the beginning. These arguments remained unresolved, for after its withdrawal from Vietnam, the U.S. Army turned its attention to preparing to fight the Red Army in Europe and eschewed involve­ment in messy counterinsurgency wars in the Third World. Despite sending advisers to El Salvador to assist in counterinsurgency operations, conducting peacekeeping missions in the Balkans, and execu