When Things Went Right: The Dawn of the Reagan–Bush Administration, Chase Untermeyer 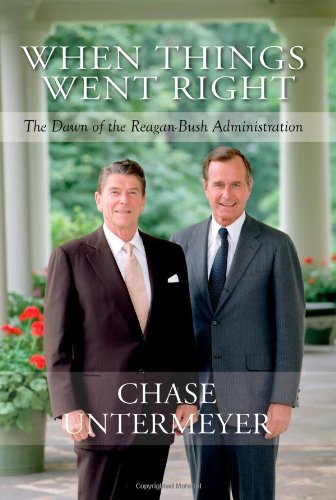 We have in this chronicle an insider’s account of the presidential administration that began in January 1981. Chase Untermeyer, present at the creation, served in the office of Vice‐President George Herbert Walker Bush and throughout kept lengthy personal diary accounts of the day‐to‐day activities over 26 months. A mere tenth of that record finds its way into the narrative, and Untermeyer avows that the book “does not pretend to be great history” (p. xii). It offers instead the stuff of footnotes—insights on quotidian affairs, the quotable quips, addenda on known and familiar personalities, and, generally, aspects of the Vice‐President’s business that lie between the headlines.

Readers who can suspend their interest in policymaking and the grand issues that engage all presidential administrations may still enjoy the ride here, and learn from it. And quite a ride it is. We follow the VP around the world–to England, Germany, and other European stops, to Guam and the Philippines, to China and Japan, Israel and Saudi Arabia, Australia, and New Zealand. Un­termeyer chose the sites. We go also to Africa (and have a “Conradian” ride up the Congo to visit President Mobutu of Zaire). Another tre