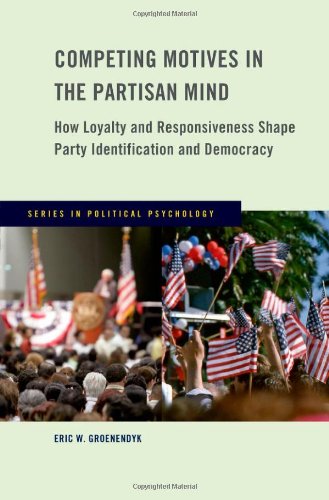 Partisanship is at the center of the analysis of citizenship in democratic socie­ties. Many great minds have focused their attention on this topic, and to make a real impact on how we understand partisanship—to do something truly new in this literature—is no easy task. Eric Groenendyk wants to do just that, and I think he succeeds. Drawing insight from some of the most important work in the social cognitive psychology of the last few decades, he blends the tradition­alist and revisionist perspectives on partisanship within a dual‐motivations theory. In brief: as citizens, we are subject to two core motivational forces that often conflict: directional motives that lead us to seek conclusions that rein­force our partisan identities, and accuracy motives that compel a search for the conclusions that best fit objective reality. Taken together, we not only want to believe that our party is superior to the opposing party, but also we want to believe that we are justiﬁed in believing this to be true. Sometimes this is easy— say, a rising economy under a co‐partisan president—but often it is not. Groenendyk focuses on how citizens negotiate these competing motivations as they confront unpleasant realities, and what happens when they fail. The overall picture that emerges is one of justificatory citizenship: citizens motivat­ed by the desire to maintain a picture of the world favorable to their party, but who nonetheless feel accountable to internalized standards of good citizenship.

Despite the introduction of accountability pressures into the model, and thus the reality of some volatility in partisanship, Groenendyk’s citizens have wide latitude to reason their way to preferred conclusions. Indeed, one of the most‐interesting contributions of the book is a theoretical and empirical investigation of the strategies that citizens utilize to justify continued identifi­cation with their party when confronted with facts that cast doubt on the value of that identity. For example, Groenendyk posits the “lesser of two evils” strategy: citizens will often adjust their opinion of the opposing party down­ward in response to negative information about their own party, thus justifying continued identification (“at least my party is not as bad as them!”). Interest­ingly, the theory thus predicts a positive association between evaluations of the two parties under certain conditions, which is confirmed by previous work and Groenendyk’s own analyses. The book utilizes a multi‐method approach here, demonstrating causal relationships via population‐based survey experiments, and filling in inferential gaps with content‐analyzed open‐ended responses. By explicitly demonstrating the use of these strategies of rationalization through multiple methods, Groenendyk provides some of the strongest evidence to date for identity‐motivated partisan bias.

The second major contribution concerns the conditions under which such rationalization is possible. Groenendyk focuses on available cognitive resources— the possession of information necessary for defense and the working memory capacity needed to use that information. His theory provides deeper insight into why variables like age and political sophistication increase partisan bias (that is, they possess more information), and he experimentally demonstrates the neces­sity of available working memory for identity maintenance, and thus also the pressure that citizens feel to rationalize their partisanship through argumenta­tion. But these results will ultimately give little comfort to those concerned about partisan biases in our polarized era; his work reinforces the hypothesis that the politically engaged will tend also to be the most closed‐minded, and, despite the existence of accountability pressures, citizens have much room for rationalization in most cases.

Groenendyk’s book is an example of what political psychology looks like at its best: theoretically elegant, attuned to the realities of human cognition, and methodologically diverse. For students of mass politics, it is a must‐read.