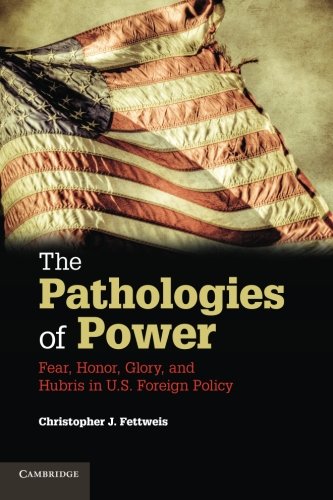 Books about improving U.S. foreign policy are a dime a dozen. But in The Pathologies of Power, Christopher Fettweis offers an unusual take on what he sees as the subpar foreign policy performance of the planet’s sole super­power. Fettweis claims that U.S. foreign policy is driven by four pathological beliefs—fear, honor, glory, and hubris—that lead to poor policymaking. The book devotes a chapter to each of the beliefs that Fettweis contends account for foreign policy disasters like the Iraq war and the Vietnam war.

Foremost among the pathological beliefs is fear, which is behind the views that the world is full of enemies and that we are living in dangerous times. According to Fettweis, America’s paranoia about communism led to costly U.S. involvement in various “geopolitically irrelevant backwaters” (p. 14) during the Cold War. The (neo)conservative view of ever-present danger is unfounded today. The empirical reality is that “there has never been a more peaceful, less violent period of time than the post-Cold War era” (p. 33).

The second belief is honor, and while it seems archaic, Fettweis says its more-cont