Model Immigrants and Undesirable Aliens: The Cost of Immigration Reform in the 1990s, Christina Gerken 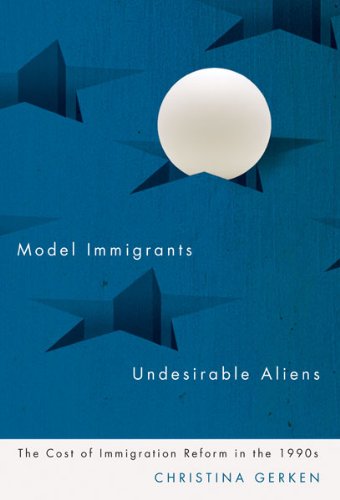 Christina Gerken makes a critical contribution to our knowledge of the debate over immigration reform in the recent past. Her detailed and richly documented analysis of the content and social implications of the debate that led to critical changes to the American immigration system provides the most­detailed discussion to date of the immigration reform discourse of the mid-1990s. Through the lens of critical-race theory and neoliberalism, Gerken analyzes how the passage of the Antiterrorism and Effective Death Penalty Act, the Personal Responsibility Act, and the Illegal Immigration and Immigrant Responsibility Act during the administration of Bill Clinton profoundly reshaped the rights and responsibilities of immigrants in the United States. Gerken argues that, taken together, these three acts ushered in a way of thinking and talking about immigration that differed substantially from previous efforts to exclude certain categories of people. Politicians, the media, and mainstream Americans embraced a new multicultural paradigm that negated the centrality of race, gender, class, and sexuality to social processes and reduced immigration to a cost–benefit analysis. Although the discourse about immigration reform remained on the surface about security, assimila­tion, and family values, “the driving