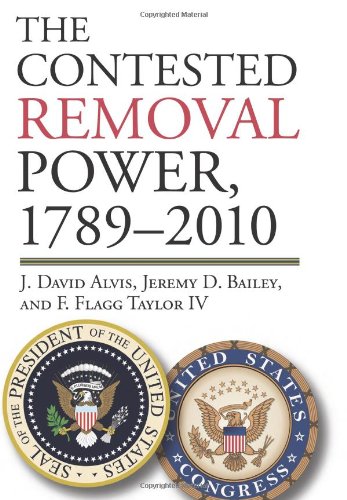 The removal power has loomed large in every expansion of national adminis­trative capacity since the First Congress. Written in 1923 amidst a burgeoning administrative state, Charles Thach’s seminal work, The Creation of the Presidency, thus concluded with an incisive analysis of the “decision of 1789,” treating presidential control of administration as the consummation of the Framers’ new constitutional order. Ninety years later, the robust congressional debate with which Thach concluded is the point of departure for J. David Alvis, Jeremy D. Bailey, and F. Flagg Taylor’s The Contested Removal Power,a penetrating account of the developmental pathway from the First Congress to the John Roberts Court.

The debate in the First Congress on the removal of cabinet officers famously culminated in a victory for proponents of executive power, who construed the Article II vesting clause as a general grant of discretion to the president and emphasized the responsibility that inhered in a unitary republican executive. By contrast, congressional delegation theorists construed the Article I necessary and proper clause as a conferral of legislative discretion to structure executive offices, including duration and means of removal. Occupying a sort of midpoint between executive